I don’t normally blog about stories in the media, especially celebrity stories, but this one has really caught my eye last year and I need to get this off my chest. So let’s start with the background information.

John Terry – England football captain, club captain, and an all-round good talent… so everybody thought until allegations of his personal life came out in the press. It was revealed that he had a 5-month affair with one of his teammate’s ex-girlfriends. 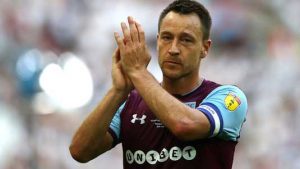 He failed to get an injunction through the courts so all of this has completely blown up – think Tiger Woods and you’ll get the picture. Terry has a wife, 2 kids, and a huge career but not anymore. Last year he was dropped as England captain and this still angers me in a way – I honestly don’t think it’s fair. In no way am I condoning the fact that he had an affair – that’s wrong especially when he has children. But to be sacked over it? That’s wrong.

Reasons behind the sacking are that he’ll cause friction in the changing rooms, and that he’s a bad role model for supporters and fans. It should be up to John Terry and Wayne Bridge (the ex partner of the mistress) to decide whether there is tension between them, and if so it should also be up to them to decide how to solve it. If this involves one or both of them stepping down then fine – it should be a resignation and not a sacking.

And the bad role model thing – that is absolute rubbish. You can’t honestly sit here and tell me that the rest of England’s footballers are sparkly clean and saintly. Far from it, but it’s only because the media have managed to reveal Terry’s affair that he becomes the one representing everyone else – can anybody say scapegoat?

I seem to remember allegations of David Beckhams “alleged” affair having absolutely no affect on his career. And a previous England manager had an affair but everyone soon forgot about that. John Terry has led the England team out on many occasions, showing rare leadership qualities and passion for the game. I still feel they shouldn’t have punished him so bad for making a stupid mistake.

If it was any normal job, and I realize it isn’t, he wouldn’t be sacked – if a work colleagues wife had been involved then he should step down with what little dignity he has left but John Terry hasn’t been given this option. I know I’m started to rant again, but I just cannot get my head around it. We’re now again months away since the last World Cup was played, but they sacked the man who has been showing more promise than we’ve seen in years.

Human nature is so constituted, that all see and judge better in the affairs of other men than in their own.